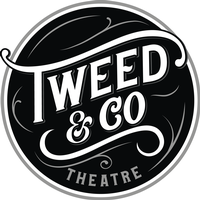 As a registered charity, Tweed & Company Theatre is the creator and producer of original Canadian musical theatre, as well as quality professional grassroots regional theatre. The company has been active since the fall of 2009, and has produced five large-scale original Canadian musicals, as well as countless other Canadian productions. Tweed & Company is based in Tweed, ON, and tours its productions around the province.
Tweed & Company Theatre currently creates in two different locations in Hastings County, on the land of the Anishinabewaki, Mississauga and Wendake-Nionwentsio which also hosts treaty 57 of the Anishinaabe and Mohawk peoples, and on unceded Algonquin Territory.

Through this territorial acknowledgement we wish to respect the ancestors who cared for this land that is now caring for us, and acknowledge and atone for the cultural genocide, erasure and anti-Indigenous racism carried out by colonial forces still present today. We will continue to educate ourselves and will continue to grow and hold space for Indigenous, Metis and Inuit people.